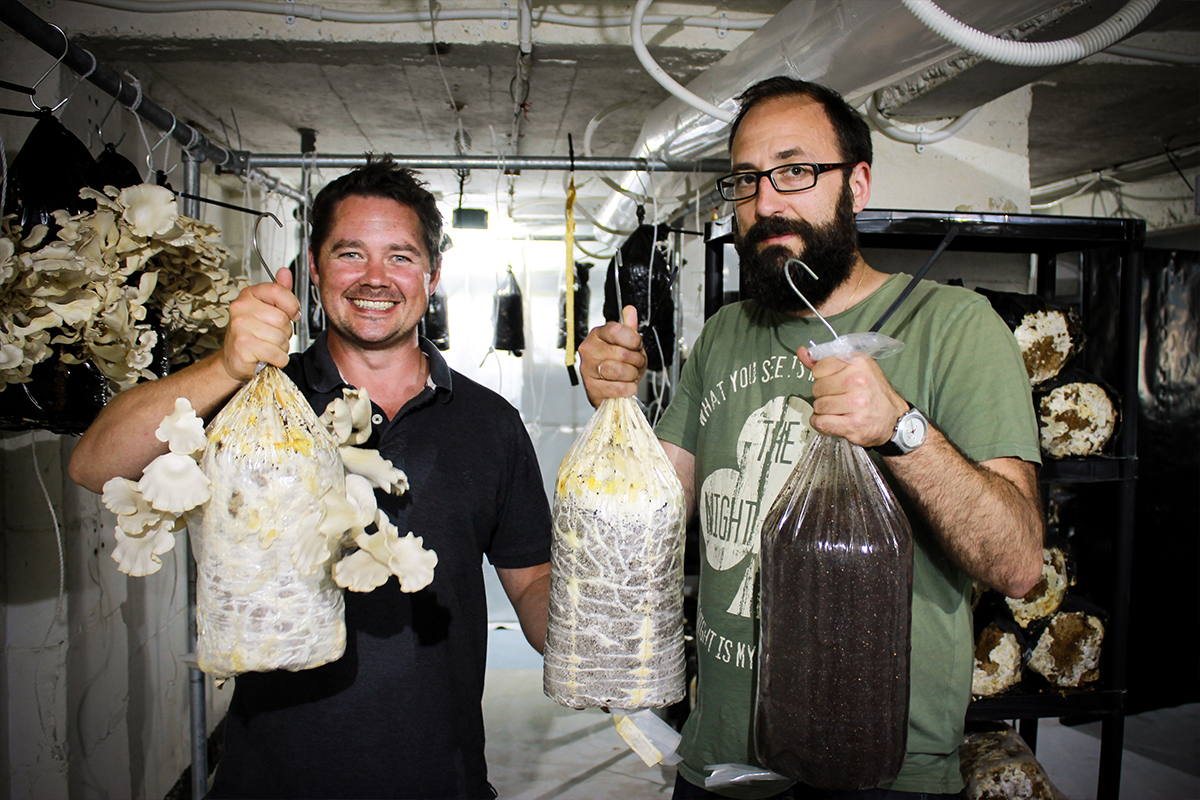 Waqar Choudhry suffers from Tinitus. Typically, when being affected by this in the night, he will listen to BBC world service until he falls asleep. One night there happened to be an interview on there about an innovative company in the Netherlands who were using waste coffee to grow these fantastic Oyster Mushrooms.

Waqar and his business partner, Luke Osborne have a mutual friend and got talking at a party. He knew that Luke owns and runs a Renewable Energy Company (EnergyMyWay) and that he was very into sustainability and naturally the conversation moved onto the subject of the radio show.

Waqar is a drug and addictions councillor and the pair wondered if there would be any scope in merging their two ethos’ of sustainability and re-habilitation through a similar project to that in Rotterdam. So, they decided to email the guys at Rotterzwam (zwam being dutch for mushroom!) and arranged a Skype to talk over their operation.

Swiftly, Waqar and Luke ended up flying out to see them a few weeks later and embarked on not only a weeks internship, learning the ins and out of the process but also an endless journey into the world of mycology.

As for the “urban” element, the pair thought the project was best suited for the urban environment. One of their key attributes is being able to convert an ‘urban waste’ - used coffee grinds-into something nutritious.

There would have been no point collecting from Leigh and Southend only to process it out in the sticks somewhere. The project is entirely local…well 98%. All their coffee grounds are collected from cafes in Leigh and Southend, the ‘Farm’ is located in the heart of Southend, beneath Maple recording studios in the Grainger Road Industrial Estate and the mushrooms are sold and consumed within the local area. Urban Mushroom’s furtherest supplied restaurant is the Anchor in Hullbridge.

They provide the cafes with reusable plastic buckets into which they empty their used coffee grinds. These are collected on Mondays, Wednesdays and Fridays to ensure that they are relatively fresh, and replaced with clean buckets. The coffee grinds are then taken back to the farm and put through a mixer with a number of key ingredients- all natural. Urban Mushrooms don’t use any chemicals in their process.

The mix is then decanted into 5 kg bags, which are hung in an incubation room for around 4 weeks in a pitch black, warm environment.

When the bags are ready, they are moved over to the fruiting room, which is where the magic happens. The fruiting room is cooler and mimics daylight. This forces the mycelium to think that it is the ideal time to ‘fruit’ and that is when it produces the mushrooms.

The guys are very grateful to their affiliates at all the coffee shops they work with. Early on they approached them and explained that Urban Mushrooms could help them reduce their carbon footprint as well as their waste streams and they were very happy to get on board and be a part of it. Luke and Waqar feel that the customers appreciate ethical businesses and they help to facilitate that.

They try to reuse everything that they can where possible. “The hooks and tie-wraps are re-usable, the spent substrate becomes an incredible compost and soil improver and the buckets are re-useable”. The building itself hadn’t been used for 25 years, so you could say they have breathed new life into that. All the floor coverings are offcuts and discards that were going to be heading to landfill. Any unsold mushrooms are either given to the Storehouse or turned into mushroom powder. This is all done to promote the ‘circular economy’, where the discards from one process are not classified as waste- but an available resource for the next industry.

As for the future, Urban Mushrooms hope to expand what they are doing. The fresh mushrooms are a ’showcase’ piece and the business would love more restaurants to come on board and support local foods. They have some great restaurants and chefs using their mushrooms but are keen to gain more of a following.

They are now selling fantastic kits for people to grow their own oyster mushrooms from their own coffee waste, which as well as the benefit of completely fresh food in your kitchen, is a fun educational piece for the children to learn about sustainability and food.

Urban Mushrooms would like to expand on the education side of things and hope to run workshops where they teach what they do and allow people to take away their own hand produced bags. Waqar and Luke are also looking to partner with other local producers and organisations and hopefully offer a way to ‘up-skill’ disadvantaged members of the community.

Luke is really looking forward to this year’s Village Green. He loves seeing the diversity that the festival brings to the town as well as a good mix of food, music and arts to look forward to. The guys are running an educational stand there on the Friday for the schools, as well as being around all day on Saturday.

When asked what his favourite mushroom dish is, Luke states “The fantastic mushroom soup that my wife makes, however, I do make some mean tandoori mushrooms roasted in the oven!”