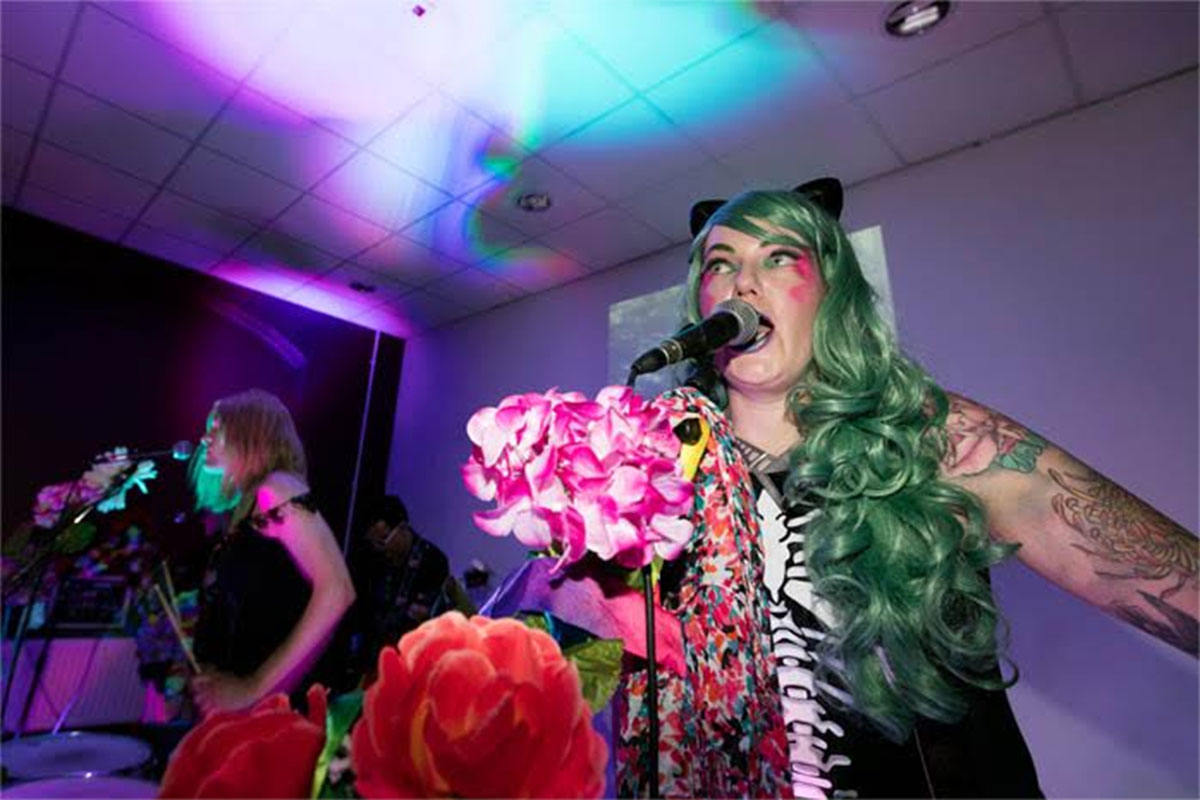 Tell us about your band, T-Bitch
The band is about having fun, keeping things simple; we're politically and socially aware so also address important issues, but in our own special way! We term ourselves as a Trans Riot Grrrl punk band, so there's a lot of songs about gender stereotyping and trans issues, but don't expect heartfelt opuses about 'the struggle'. We want to encourage people to feel comfortable no matter who they are and questions they face concerning gender and sexual choice. Too many people hide away afraid of what others might think and that is really upsetting, we're putting love to a punk riff out there for all!

Did you always play instruments as a kid?
I was a super quiet child! You wouldn't believe it now. I was a watcher, I observed others intensely and was fascinated by instruments and musicians; my first crush was David Bowie. I fantasized about playing piano but couldn't afford one or lessons, and I still romanticise about playing. My first instrument was a bass guitar, (inspired by Kim Deal), I bought it myself at 17, I played Nirvana, Hole and The Pixies on it to myself, I barely ever plugged it in. It moved house with me the 30 odd times I've moved, but I had no confidence to get out there and play it. I briefly screamed in a Babes in Toyland covers band, we were awful! I have T-Bitch to thank for giving me the push I needed to play publicly.

Who are your musical influences?
I could easily listen to P J Harvey and Pantera in the same sitting. Grunge and Riot Grrrl are a massive influence; strong messages and kick ass riffs. Babes in Toyland, Bikini Kill, Sleater Kinney, Nirvana, Manic Street Preachers, Nick Cave, Joy Division and Bauhaus. Bands and people who stand for something float my boat. I think that comes from the folk music I grew up listening to, my mum had great taste. I love Joan Baez, her commitment to a cause is inspiring and her voice heavenly. Amanda Palmer is my contemporary influence, she blurs the line of art and music so perfectly and she's a pianist. I have a massive crush on her.

Ridiculously difficult question klaxon. What is the best gig you've ever been to?
Wow, argh that's super tough! I've seen the Manic Street Preachers in excess of 50 times so that speaks volumes, but the best gig probably has to go to the Dresden Dolls at The Roundhouse in 2006. A side show set up inside saw; contortionist, circus performers and a screen showing film noir. The night was hosted by Margaret Cho, occasionally revealing prosthetic appendages like 6 breasts; she made the crowd howl with laughter. Then the Dolls gave the performance of a lifetime, my heart was pregnant with emotion, I cried when it finished and missed the last train home.

Do you think Southend will always be a magnet for creatives? Why do you think that is?
There's a real vibe in Southend and its surrounding areas. Perhaps it's the landscape, the estuary view is like no other, changing daily, it breeds inspiration. Even in Pitsea, where I grew up, the landscape is dramatic, a failed Utopian ideal leads to poetic thought (it obviously did something for Depeche Mode!) Historically it's a fascinating place, there has been a hive of radical living here for years, I don't think a lot of people know about that side of Essex so it must be something in the air that draws people here, a mystical force!

I'm intensely proud of our bit of Essex, we put up with a lot prejudice but shrug it off and get on. Music brings people together and life's woes disappear. The music community here right now is so rich. You could be sitting in The Railway Hotel when Dave or Fi Dulake jump on the piano and treat you to a few tunes or you might stumble across the folk club practicing in the Crooked Billet, The Leigh Folk Fest, Preview, Sundown arts, The Hoy at Anchor, countless open mic nights, there is live music every night of the week and your involvement is encouraged and never judged. It's an incredibly welcoming and nurturing community and I think that's what keeps it alive. Love for playing, love for listening.

What's next for you creatively?
I am always exploring new avenues for expression. Performance art is a real passion which T-Bitch is keeping fulfilled at the moment, although I've been reading a lot of folk lore and getting inspired for something new. I am quite the dreamer, scribbling in my studio keeps me just as satisfied creatively as prancing around on stage playing the brat, although there is nothing quite as liberating as shouting “knickers” at the top of your lungs!