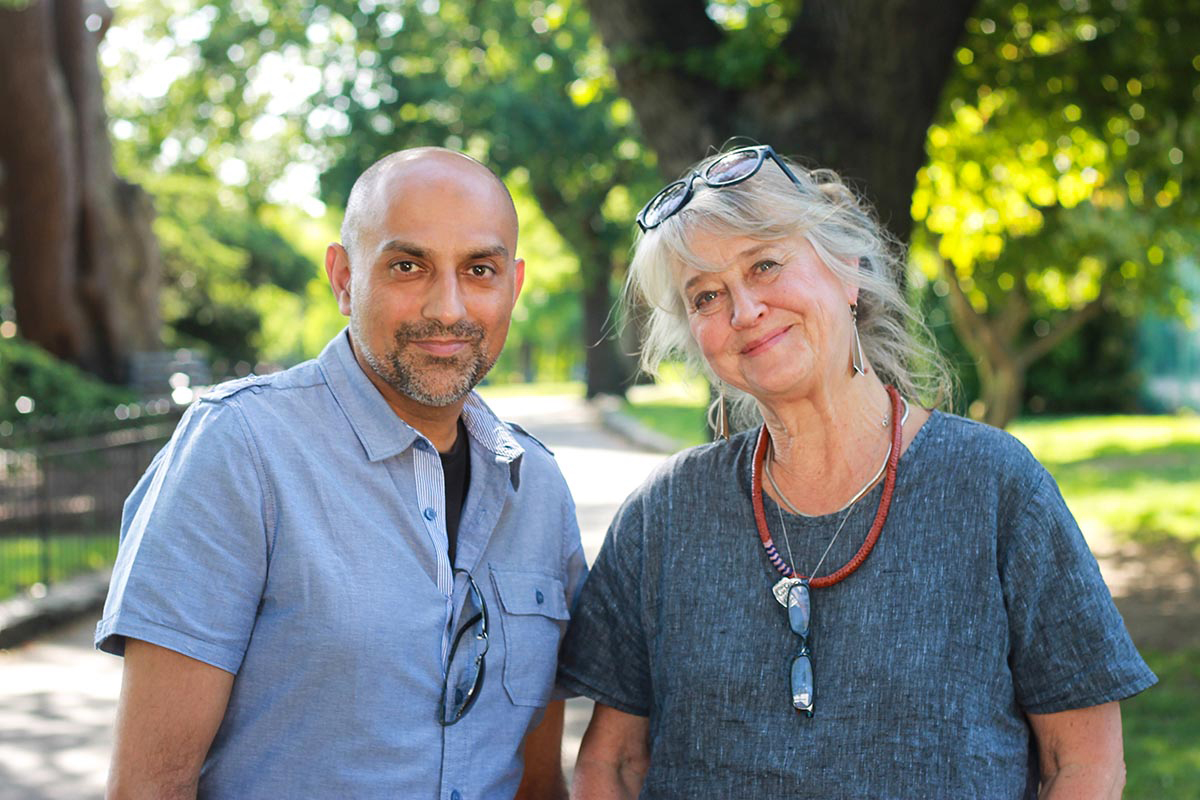 Let’s start by telling us who you are and a little overview of the project?

I: Well I’m Indi Sandhu, I manage the Essex Cultural Diversity Project, we’ve been working with Essex in Southend and Thurrock over the last 9 years supporting cultural diversity within the arts and heritage sectors.

A: I’m Annie Menter and I got involved with Essex Cultural Diversity about three years ago. I was director of the WOMAD foundation which is the educational arm of the WOMAD festival and Lindsay Strange who also works with Indi came to me and asked if we could put some artists in for a project to raise the profile of the many many BAME artists that there are in and around Essex.

I was delighted and thought that it would be a really good project,, a lot of our work is in schools and with community groups, both in this country and internationally, so it seemed like I’d got a good pool of artists who would come and do that kind of work who were very high quality but also very grounded.

What's your relationship with Village Green?

I: I came to the first Village Green back in 2008 and since then I’ve since been coming back every year. Through the Essex Cultural Diversity Project I've worked with Metal on Global Village, which started off with a small tent and then gradually built into a big stage and arena now featuring world music and dance.

What other projects have you been working on lately?

I: There is this project were working on with Thurrock Museum called by By Thames to All People of the World, particularly focusing on Czechoslovakian, African Caribbean, Nepalese and Sikh communities. Those are the communities that settled in Thurrock over the last 40-50 years due to the docks and the cement works so that’s why we targeted these communities which settled there. We’re working with the museum to actually develop audiences and assemble artefacts and collections related to those communities.

The museum didn’t really reflect anything to do with the diversity of the local community. That’s what we’re actually trying to promote, that these communities can have a sense of ownership and have something related to their communities that can be exhibited there for all the cultures to share.

A: Just to add to what Indi is saying, I think it is interesting that the artists we’re bringing to Village Green are from places as far afield as Jamaica, Zanzibar, Ghana, Colombia and the UK and all of them have at some point settled in the UK in different areas and have brought their culture with them obviously.

What I think what is interesting is that most of them have been in this country for up to 20 years and British culture, whatever that is, has influenced their styles and their art and vice versa. It's a real exchange of experiences and ways of being in a country that you may not have been born in. There is that sense of feeling, are we outsiders or are we insiders with being here so long? The lines are getting blurred, and with the current migration debate it is interesting and important to raise the value of the richness of the people that have come into this country over the years, really important.

Let’s talk about Village Green, you will be appearing at the festival, what does that entail?

I: This year at Village Green we have a Global Village stage which is going to be a fusion of world cultures from talent from around the world and also established national and local artists as well, all performing together.

This developed from last year’s GMAD (Global Music and Dance weekend) in Colchester. They were training and also mentoring last year so now we’ve taken it up to the next level where this year there is going to be collaborations and performances together.

What are you doing that is unique at Village Green?

I: I'm going to be doing Bollywood dance and it is a MUST. It’s become a real iconic thing where you just get a sea of people all ready to go. You get such a buzz, honestly it is just amazing to see all the people dancing and just enjoying themselves as well, it’s become a regular event with the schools day now as well, The Next Generation.

What is the goal of your VG appearance?

I: just to promote cultural diversity and community cohesion and also understaning about each other’s traditions, customs and cultures. I think that is very important and that’s where the arts can play a big part in community harmony.

A: I think it’s about challenging stereotypes and busting myths about people from somewhere else who actually come from where you are, where I am. They’re here and they contribute to society here in Britain, in England. I think that the artists that we’ve chosen to come into this project are very much the sort of artists who are happy to share their experiences. Although they are international artists, performing around the world, they actually know the importance of encouraging new artists and bringing people, raising the profile if you like, of the arts in Essex, and saying “you can do it! I’ve done it so you can do it!”

Who are you looking forward to at this years Village Green?

I: This year, probably Hardeep Singh Kohli, big fan of Hardeep, he’s doing the Chat Masala. I saw it on tour at the Edinburgh Festival, it’s great, he’s doing the cooking and the also the comedy as well at the same time, I like the title as well, so that should be good, I’m looking forward to that very much.